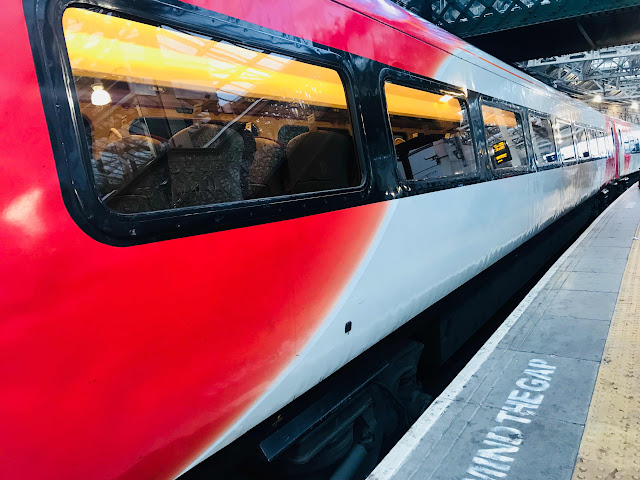 I find trains quite stressful, checking the train board with the train stopping. Is it your one ? Is it a delayed one ?. I booked a train with, Lner Edinburgh to York. I was heading to meet a friend, from York. It costed £39 and was the cheapest ticket I could find (booking 3 months in advance).

The train was leaving Edinburgh Waverley at 9am. I arrived at The Waverley early and waited at the platform. The train arrived around 08:30am. My ticket had coach D, so I got on and found my seat number. I read online there is plug sockets to charge things. The plug socket is on the wall beside the window seat. I was an aisle seat and there was a women sat beside me, so there was no way I could charge my phone using the socket. It would be different if you were traveling with someone, to be able share a plug socket. Lucky when I travel, I take my travel usb charger. The train left Edinburgh, at exactly 9am and arrived in York a little later than half 11am.

I was booked the 18:30pm York to Edinburgh train. I arrived early at the platform. The train came and it was crowded. People were standing, right to the doors. Then a Lner worker came along saying no one else get on and that another train was heading to Scotland, over the other side of the platform. I ran over the bridge and onto the other train. It was surprisingly empty considering the other train was packed and people standing. I had 2 seats to myself, the whole journey. It was nice not having the awkwardness, of sitting next to a stranger. The train left about 18:50pm and arrived in Edinburgh at around half 9.

Someone told me you can claim if you didn’t get on the train you were booked on, so I tested it out. The Lner website had 2 claims, Seat Guarantee or Delayed Train. I clicked Seat guarantee and filled in my train details, which took about 2 mins. Within a week I got an email saying I didn’t qualify, as my train was only 6 mins delayed. I replied back “you have a claim for seat guarantee or delayed train” I never got my seat I was booked on, as it was too full. I got on another train. Therefore I was more than 6 mins delayed”. Another week later I got a letter in the post saying I qualified for £8.55 refund. It was a random amount the odd 55p, but not bad for something that took 2 mins to fill out.

I find getting on a plane a lot less stressful than a train. Also my flight to London and Dublin (which is further way) was cheaper, than my train to York. I would say the plus side I found with the train, it takes you right into the city. As you can’t fly to York, I would go to York again on the train.
Danielle
Follow Danielle UK on social media
Instagram
Facebook
Twitter